Building Peace: Our Work for Change

Building Peace: Youth at the Heart of Peace Work 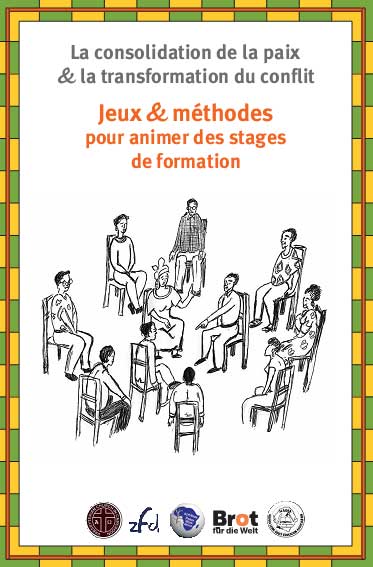 When Katharina Schilling showed us two compilations, a handbook of reference and a practical guide, which she had carefully elaborated in English on the basis of her professional experience and the challenges of working with many young people in Sierra Leone and Cameroon, we felt we had to make these tools available to a wider audience in Africa and elsewhere.

In addition, the beautiful illustrations concocted by his colleague Julius Nzang, a young Cameroonian journalist who participated in the animation of seminars for youth. In our work with Civil Service for Peace networks in several African countries, we have come to realize that working with youth around and within conflict is an essential task in building a better future. Col- leagues and superiors in Katharina at SLADEA (Sierra Leone Adult Education Association) and the Presbyterian Church in Cameroon (CCP), as well as the many young people people of the training sessions have, over the years, supported and allowed to carry out this work and now we can all benefit from their discernment and their experience.

After the publication in English that was very successful, we were able to produce the practical guide in French. For the moment the reference manual only exists in English. This practical guide addresses issues related to peace and conflict transformation at the individual, group and community level. Many of us work in contexts of violent or latent conflict that precipitate entire regions or countries in war or allied (warlike) situations. The boundaries between these two levels of conflict are often blurred, for example, in matters of identity, loyalty and trust.

We believe that this book can help young people and their trainers better understand their own situation and learn to tolerate differences in approaches, peoples, ethnic loyalties, religion and even values, as long as there is dialogue and an interaction for the achievement of common objectives. An analysis of the context in which you live, conflicts within and around you, games of interest and power, helps you become part of your life and not a victim of your own life.

This book was finalized in Cameroon, a country that is experiencing a fragile peace. The analysis of the context by the partners of the SCP revealed a number of situations linked to bad governance and highlighted many frustrations that could threaten this peace. Young people who, neglected and frustrated, represent an untapped potential in terms of human and material resources, the status of women and girls who are not respected, electoral processes questioned, radicalism, fundamentalism and discrimination are so many problems in Cameroonian society that could be the source of violent conflicts. These problems are also present in other countries where the SCP operates.

That is why we also hope that this book can help create an interaction between youth networks in different countries and regions, because each concept, exercise and definition must be linked to the concrete realities in which people live and be effective in different environments. That is why we hope that you, readers and users, will improve and enrich the book and share it with others. Contrary to the impression one may have, the future of Africa is not in the hands of corrupt elites, warlords, dictators, or between those of the International Community and its “experts”;

It depends on the youth of Africa. We believe that instead of being mistreated as child soldiers, victims of rape and angry people without hope or future, African youth can become a massive weapon of construction.