Building Peace: Youth at the Heart of Peace Work 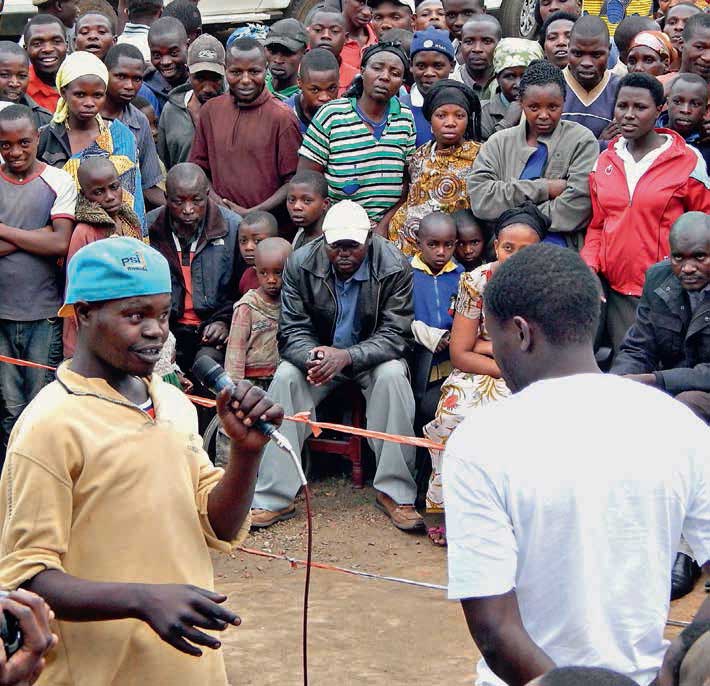 Intervention of spectators during a theater-forum session in Rwanda

In Africa – as elsewhere in the world – there are various modes of expression and social exchange that we naturally develop on a daily basis. Public speech, gesture, tale, mime, declamation, griot stories and songs, evenings around fire, forms of language (verbal, gestural or collective), narration, etc. are forms of communication and education that are not necessarily linked to what is commonly known as theater. Generally in African villages and towns there are no scenes, costumes and accessories, written texts or predetermined patterns, yet the theatrical mode is part of the daily life of the people. Of course there are also African theater artists. To give just two examples: Nobel Prize winning Wole Soyinka coins are now classics. Producers such as Senegalese Sembene Ousmane used theatrical art and cinema to bring the debate on governance issues.

The second pedagogical handbook that we publish alongside the series Building Peace is focused on theater as an instrument for promoting peace, but also for education for the younger generations. Professionals and theater enthusiasts working in the countries of the Great Lakes (DR Congo, Rwanda, Burundi, Uganda and Sudan), Sierra Leone, Cameroon and Nepal present this discipline as a technique that opens up children and the adult, from the multiple horizons to the level of expression, the development of the artistic faculties, but also allows the reflection and the interpellation on our prejudices and our values. This is an essential first step towards societal change. Theater is also the stage, the audience and its reaction and interactions with the theme.

To speak of theater for peace is to think of a communication project that leads to a representation in which adults and young people actively participate and learn to become actors of their own future. We are publishing this manual at a time when the Ebola epidemic is straining the peoples of West African countries, including Liberia and Sierra Leone, where Bread for the World works with local partners and professionals in Civil Service for Peace (SCP) programs. This situation is largely linked to the failures of health systems in countries that are just emerging from deadly wars and at the same time creates a hysteria that is difficult to manage in the West.

Even in the countries concerned, there is a great danger of exclusion and marginalization of the populations concerned, of the destruction of solidarities and the social fabrics necessary for survival. Yet our local colleagues on the spot show us that we should not give up, but do everything possible to raise awareness and to arm people against this terrible disease. Superstitions and ambient rumor not helping, it develops harmful behaviors in the popular unconscious. It is necessary to find original and ambitious means of expression to publicize the risks, to create the reflexes necessary for the survival of all concerned, the ways of doing, the attitudes and the behaviors that will slow down the evolution of the disease and to control it in order to defeat it in the long term.

In this manual, the SCP network shares the experiences of a few individuals and organizations who have used theater as a communication tool for change and peace. There are theoretical foundations, concrete examples with regard to content and techniques and methods that we want to make available to a greater number of people. The goal can not be to make you professionals of the theater, but you will find techniques, tricks, experiences and experiences of people with experience in this discipline.

This contact aims to demystify the theater and add it to the toolbox of SCP activists. Theater as a tool for reflection, communication and expression of emotions and points of view, which can be diametrically opposed, can allow an opening in difficult situations to be carried out, in cul-de-sacs that seem to have no way out and in conflicts between people and communities. All the experiences described in this manual have been developed in a community manner with the help of experienced support professionals and African artists.

We thank Charlie Haffner, Jeanne Medom, Claus Schrowange, Silvia Stroh and our colleagues from the SCP GIZ of Nepal for their enlightening and rich contributions. Many photos illustrate the texts and make it possible to feel better the emotions and the clicks that happened on stage and in the public. We hope that this publication will also create links and exchanges between the different actors who are advancing this approach in Africa, Asia and Latin America.