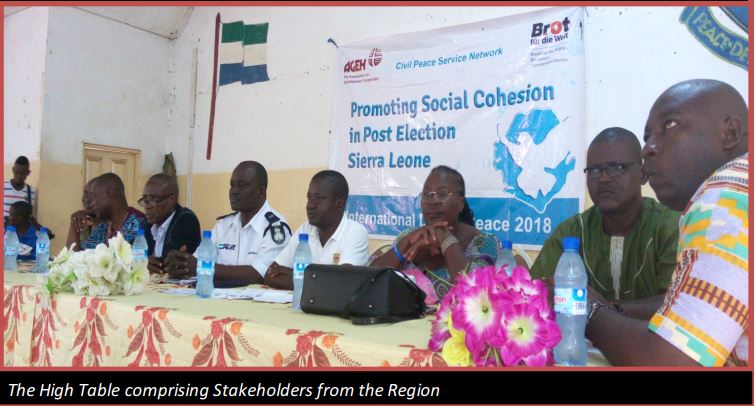 On the 21st September 2018, the Civil Peace Service (CPS) Network celebrated the International Day of Peace on the theme: “Promoting Social Cohesion in post elections Sierra Leone” The entire celebration was championed by BFTW and AGEH partners across the country. In June 2018, partner organizations from BFTW and AGEH started the planning process ahead of the celebration. At various meetings held, partners agreed on the issues that
should be addressed including the theme and the format through which the celebration will take this year. 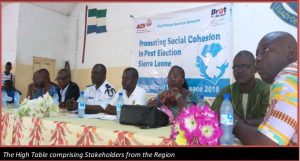 After a successful implementation of activities marking the celebration at regional levels with organizations in the different regions taking the lead, members met on 21st September in Bo, Southern Sierra Leone to climax this year’s celebration. Regional and national stakeholders were in attendance to discuss issues bordering on peace and unity in Sierra Leone.
Speaking on behalf of the BFTW Partners, Adenike Cole used the occasion to wish Sierra Leoneans happy International Day of Peace.

She reminded her audience that the Day was set aside by the United Nations (UN) to reflect on issues affecting our global peace and to encourage the populace to refrain from acts that would disturbed the peace and tranquility of our society. According to Adenike, peace is
something that concerns each and every one of us in the society and it hinges on every sphere of our lives. She added that peace does not only mean the absence of gun sounds but there are also some other social issues that have the potential to threaten our hard earned peace.
That was why the Network looked at the current events as they unfold especially after the elections which she believed could disturb our peace. 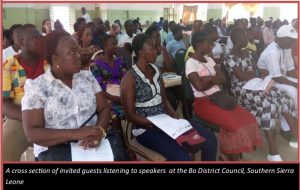 “During the elections, there were some skirmishes and misunderstanding between and among some political party supporters. To say the least, skirmishes and misunderstandings are inevitable when it comes to elections. Being that even after the elections, we still continue to see division and social injustices; the CPS Network resorted to calling for social cohesion in the country.” She said

On his part, the country Coordinator of the AGEH; Manfred Rink said that there is only Sierra Leone the people have and that that is why Sierra Leoneans should embrace it and work together in peace and harmony. He advised that people should stop putting their political parties or regions above Sierra Leone but that the interest and development of the country should always supersede all others interests. Other stakeholders from the Inter religious Council of Serra Leone, the legal Aid Board, political Parties’ Registration Commission,
and the military and police personnel made meaningful contributions and pledged their supports towards building and maintaining peace and social cohesion in Sierra Leone.