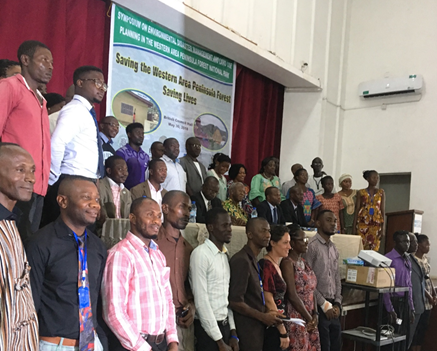 The lead Coordinator of the Civil Peace Service (CPS) Network Sierra Leone chapter who is also the Executive Director of the Conservation Society of Sierra Leone (CSSL); Dr. Sheku Kamara has told stakeholders in Freetown that the Network is poised to prevent conflict in all spheres of life.

Dr. Kamara was speaking at a one-day Symposium on Environmental Disaster Management and Land Use Planning on Wednesday 30th May 2018 in the Western Area Peninsula Forest National Park (WAPFNP). The symposium was organized by CSSL; member of the CPS network in the Mano River Union. The symposium which was held at the British Council Hall attracted stakeholders from institutions like the Office of National Security (ONS), Environmental Protection Agency (EPA), National Protected Area Authority (NPAA), Environmental Foundation Africa (EFA), Fourah Bay

College (FBC) and other organizations to strategically think of how best to manage disaster and land use planning in the WAPFNP and explore ways of forestalling the recurrence of the August 2017 mudslide and flooding in Sierra Leone.

The CPS Coordinator welcomed participants to the symposium which he said was convened to discuss very important issues that border on national security. He intimated that Sierra Leone is continuously facing an environmental challenge which was all the more reason why key stakeholders were invited to the meeting so as to brainstorm and bring out short, medium and long term action points which could permanently save Sierra Leone from recurring calamities.

Read the document in PDF format