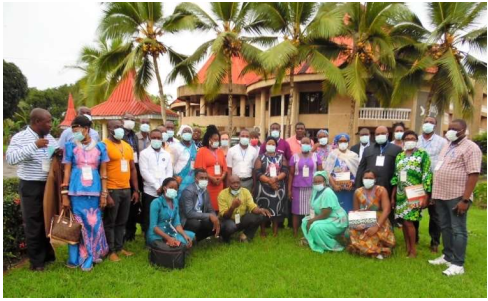 17 member organisations of the Civil Peace Service, (CPS) and Bread for the World (BftW) Cameroon have shared experiences, gained knowledge and skills on how to set up their various activity projects for 2021 and resilient in their Peace Work amidst COVID 19 context.

This was during the 2020 Annual Meeting with theme: “Continue Peace Work in Crisis Context” organised by CPS/BftW Cameroon Coordination
Office from 2nd to 5th November, in Kribi, South Region. 35 participants took part in the meeting which was facilitated by Mrs. Florentine
Nekdem Fandio, National Coordinator of CPS/BftWCameroon.

During the meeting, participants carried out their local Context Analysis, reviewed the management of COVID 19 at their various organisations, engaged in Networking with other organisations and developed Thematic Advocacy plans of action/Training Needs. Within the meeting, members benefitted training on CPS Planning, Monitoring and Evaluation (PM&E) model and equally had a moment of Exchanges with CPS/BftW and Support online.

From the Local
Context Analysis carried out by focal groups at the meeting, it was revealed that there are still peace works to be done across Cameroon. In the North West/South West, the analysis showed a slight improvement in school attendance with regards to the Armed Conflict. The improvement in school
attendance here is mostly in the urban and semi urban areas but general fear, insecurity, hunger, killing, kidnapping, rise of new inter tribal conflicts as a result of bigger armed conflict and exploitation from state soldiers and
armed fighters remain real challenges to the population.

In the Grand North regions, relationships between the elite class and population; parent and youth and youth and local authorities were observed as weak, thereby creating tensions. The issues at state are that the population accused the elite of manipulations and misrepresenting their aspirations in the political scenes while the youth say the older generation is the cause of their problems (joblessness).

While in the Centre, South and East, the working group observed increase insecurity/crime wave, increase in domestic violence against women, lack of job opportunities for youth, intimidation of political actors, mistrust by population over the management of COVID 19, increased in IDPs as a result of the armed Conflicts in NW/SW, ban on political street manifestation amongst others. Actors mapping shows tensions between party in power and opposition political parties and private media and government.

From the Context Analysis and Actors Mapping, members proposed and examined the way forward to handling the tensions. It was generally resolved that Advocacy, Sensitisation and Education through Training workshops are the key means and methods to help the various situations. “In the NW/SW regions, we need to engage in more Advocacy projects and workshops to get the population, armed fighters and military understand the need for peace, security and social coexistence”, Chambi Julie Andam
from COMINSUD said.

Also, members benefitted training on Planning, Monitoring and Evaluation from CPS/BftW’s Marcos Smith. This exposed the participants on how to better plan, monitor and evaluate CPS/BftW’s projects for effective results. One of the participants from PCC, Rev Nta William Nche attests. “This training was very necessary. It has given me a better way of planning, monitoring and evaluating projects. It will limit the stress and time we use to put in writing out various reports.”

At the end of the meeting, Mrs. Florentine Nekdem Fandio, CPS/BftW’s National Coordinator and main facilitator encouraged partner organisations to continue the efforts for peace and never to turn their backs on conflicts. She equally called on them to use their experience and knowledge gained at the meeting to formulate better activities in line with CPS Strategic Plan 2021+ to build stronger peaceful societies. A minute of silence was observed for the School children killed in Kumba.