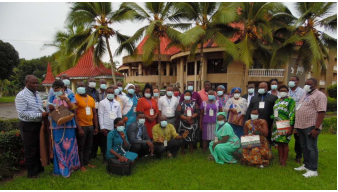 Organizations and partners under the Civil Peace Service (CPS) Cameroon and Bread for the World (BftW) have been given the mandate to intensify peace work in crisis context. This was the outcome of their annual meeting
held in Kribi from 2nd to 4th November 2020.

Organized by the CPS Cameroon and BftW team the meeting, the meeting brought together over 20 organizations working in the domain of peace and sustainable development. In an opening devotion from Psalms 133, the Rev. Ngando Paul and Njoya Hassan, called on the peacebuilders, to live in the unity of Christ. The over 35 participants used the occasion to observe a minute of silence in memory of the children who lost their lives in Kumba. In times like these, the two servants of God encouraged the partners to be determined in the work of peace as they represent the light and hope of Christ in the world.

While encouraging the CPS Cameroon partners, the BftW team in different voices, saluted the efforts of the different organizations in various peace actions on the field geared towards transforming the conflict positively especially to enhance nonviolence and human relationships. Florentine
Nekdem Fandio, CPS Cameroon Coordinator, urged all the partners to focus on the new developments the crisis has brought in the various regions in Cameroon, and look for best strategies possible to overcome them for peace and development.

During the meeting, the partners carried out a global analysis on what has changed in their local context, which challenges, the population is facing, make suggestions on the way forward, while also carrying out a stakeholder
mapping of the situation. Some of the issues that were common in almost all regions of Cameroon, was the increase in high crime wave, youth unemployment, economic hardship, insecurity, violence, Gender Based Violence, health challenges, radicalization and increase in high standards of living among others. In most of these challenges pinpointed, the partners saw the need to mainstream approaches looking at all components of society, encourage the use of cultural/local societies for mediation, discourage impartiality in the management of resources, focus on the enhancement of intercommunity dialogue as well as strengthen community
cohesion.

The challenges brought about by the Novel Coronavirus was not
undermined as partners equally focused on intensifying strategies
that can be put in place to manage this health crisis.as a way
forward, the participants proposed mitigation strategies ranging from the enhancement of risk management skills, personnel training, training on the use of smart ICT tools while working from home, information management, high value for media to resilience.

The meeting was a forum to network with other organizations, create avenues of working together in different domains and also benefit from recent development and skills on better Planning, Monitoring and Evaluation(PM and E) tools as CPS/BftW partners.

It ended with satisfaction expressed by participants, an indication that much has been gained professionally that will go a long way to ensure better implementation of projects especially according to the PM and E of the CPS/BftW guidelines, as echoed by Dzebam Godlove of ISTP. However, participants propose the extension of the number of days of the annual meeting while Mme Florence Yousseu of APADER appealed to BftW team to organize training for new partners so that all can function well guided by the standards of the CPS/BftW. Fortunately, this was given a green light during an exchange session with BftWteam and CPS partners which further gave both collaborators the forum to discuss on several issues for better collaboration and a fulfilling outcome.This year two new partners were
welcomed into the CPS family and amongst them is the Cameroon Community Media Network CCMN.