The Council of Protestant Churches of Cameroon (CPCC) has empowered some key leaders from CPCC member churches and Civil Society Organisations with skills on conflict analysis. This was during a three day workshop at the CPCC multipurpose hall at rue Ceper, in Yaounde. The conclave which spanned from the 10th  to 13th May 2021 was aimed at introducing the concept of “Do No Harm” to religious leaders and leaders of Civil Society Organisations; in order to get them actively involved in fighting the growing fragmentation of the Cameroonian society at all levels .

In a keynote address, the President of CPCC, the Rt Rev Fonki Samuel Forba told the church leaders that they are the ones to bring justice and peace in Cameroon:

“As leaders in the church, you are the ones to bring justice and peace in the land. I believe that through the concept of Do No Harm, you can transform the nation to what it is supposed to be”.

The Rt Rev Fonki further emphasized that the organization of the workshop on ‘DO No Harm’ was a clear indication of the commitment of CPCC to play his role at the national and international arena, for a radical change of mentalities in Cameroon.

“Let us be peace makers, let us build our societies with justice, let us promote the culture of non violence”. The concept of Do No Harm is very relevant in the Cameroonian context today, following the Boko Haram insurgency in the North, the influx of refugees in the East, the  socio-political crisis in the North West and South Regions, and the heavy impact of the global health crisis caused by the COVID-19 pandemic”, the Right Reverend added.

According to the coordinator of the Civil Peace Service in Cameroon, Mrs Florentine Nekdem Fandio, the ‘Do No Harm’ concept is an approach of conflict sensitivity which doesn’t focus on solving problems but on how to work or intervene in a conflict situation.

“Before going to any environment to implement a project, you need to know all the actors involved, and who the beneficiaries of your project are; do a context analysis, and know the connectors and dividers”, she emphasized.

During the three days conclave, over 42 participants were schooled on the use of three conflict analysis tools: conflict timeline, the conflict tree, conflict mapping, and the seven steps of Do No Harm. The conflict in the English speaking regions, the cattle grazers/farmers conflict in the west, tensions between ethnic groups in the Adamaoua region were brought into perspective.

The “Do No Harm” approach is focused on building local capacities for peace. The concept was generated from an empirical study of 15 organizations and 25 feedback workshops. The critical experiences of Relief and Development organizations in Somalia (1992) and Rwanda (1994) prompted the researchers at CDA to sought ways of administering aid without exacerbating the conflict situation.

“How may aid be provided in conflict settings in ways that, rather than feeding in and exacerbating the conflict, it may instead help local population to disengage from the violence that surrounds them and begin to develop alternative systems for addressing their problems”, they asked.

The Do No harm concept has seven great lessons that constitute the tenets of the approach, one of the facilitators, Florentine Nekdem Fandio explained:

“Assistance is not neutral, it is part of the conflict situation; there are two realities in every conflict situation: dividers and connectors. While the former refer to what causes tensions, the latter centers on what bring people together or reduce tension. Also, assistance has impact on the connectors and dividers, and resource distribution, implicit ethical messages and details of assistance programmes matter in a conflict context; and there are always options for changing assistance to eliminate negative outcomes or contribute positively to peace building”.

The project ‘Do No Harm’ is sponsored by the Civil Peace Service (CPS); and the Council of Protestant Churches is accompanied by the CPS national coordinators in its implementation in Cameroon. Facilitators at the workshop included Rolf Grafe, who gave his presentation online from Qatar; Florentine Nekdem Fandio, CPS National coordinator; John Essobe from CPCC, and Arnaud Tonga from DMJ.

From Yaoundé, CPCC envisages to take the Do No Harm concept to member churches and CSOs in the North, East, West/Littoral and South/North West regions of Cameroon. 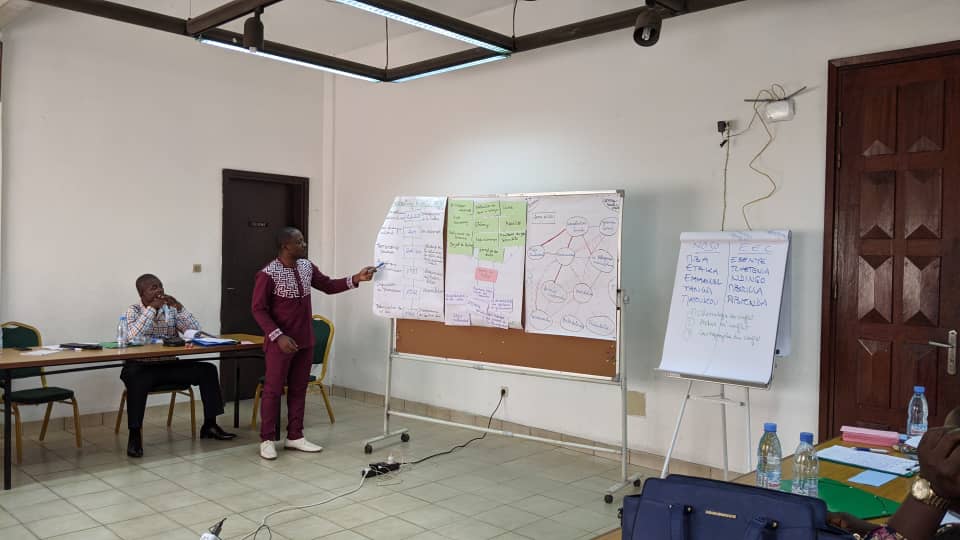